I have been reading up on mechanical keyboards and the subculture that has started growing around them.

Mechanical keyboards have individual switches for each key, each containing springs, sliding pits of plastic, and metal contacts. They have been superseded by rubber-dome keyboards largely because the latter are cheaper to manufacture. Why are mechanical keyboards so popular with a hard core of people who are fussy about keyboards?

First, mechanical keyboards have a different aesthetic: feel and sound different. Rubber-dome keyboards feel mushy by comparison. Fans claim the better feedback helps them type more accurately and faster. Gamers find that a key that springs back after you release it can let you activate it faster.

Second, being made from discrete switches means manufacturers can offer more options in terms of physical layouts and tactile feedback. (Although anything other than the 104- or 105-key layout are still uncommon.)

Third, being made as an assemblage of parts they are more amenable to customization and even DIY.

So let’s discuss options first and customization after.

Computer keyboards used to contain just the letters, figures and the usual ASCII symbols, plus a few control keys. This changed with the popularization of what used to be called extended keyboards, first with outlier numeric keypads, and later with an additional satellite in between them with navigation keys. After some experimentation with even larger numbers of keys, what has become known as a full-sized keyboard has become ubiquitous.

For me and anyone else who does not put much value on the numeric keypad, this is unsatisfactory. A fair amount of desk real estate is taken up by keys I do not use, which forces the mouse to be further to the right, which is poor ergonomics. For weirdos like me, fewer keys is better. The commercial keyboard market offers two main, semi-standard alternatives to full-sized keyboards: the tenkey-less keyboard omits the numeric keypad but retains the navigation cluster, and the 60% keyboard additionally drops both the navigation cluster and the function-key row, resulting in something even more cut-down than most laptops.

On top of this, the gamer market has also created sufficient interest for some manufacturers to offer their keyboard models with a choice of key switch. Different switches are tuned to give different amounts of tactile and auditory feedback as you type. The Cherry MX series (form German keyboard company Cherry) uses different coloured stems to tell them apart, so you will see people saying they prefer Cherry MX clears to browns, or blue for the office and red for gaming, or whatever.

So it is that when I acquired an interest in mechanical-keyboards (after briefly using a colleague’s at work) I started trawling through useful sites like Deskthority, The Keyboard Company, and a well-known online retailer trying to find the perfect fit. In the end after looking at lots of keyboards costing £120 or even £200 or more I plumped for a £27.99 tenkey-less Easterntimes Tech I-500 (listed on Amazon as ‘VicTsing 87 Keys Mechanical Gaming Keyboard’).

Key switches are manufactured separately from the key caps you actually type on. These have a slot or peg underneath them that slots on to the switch, and you can pull off the caps—preferably with a fancy keycap puller—and replace them with different ones. Why do this? 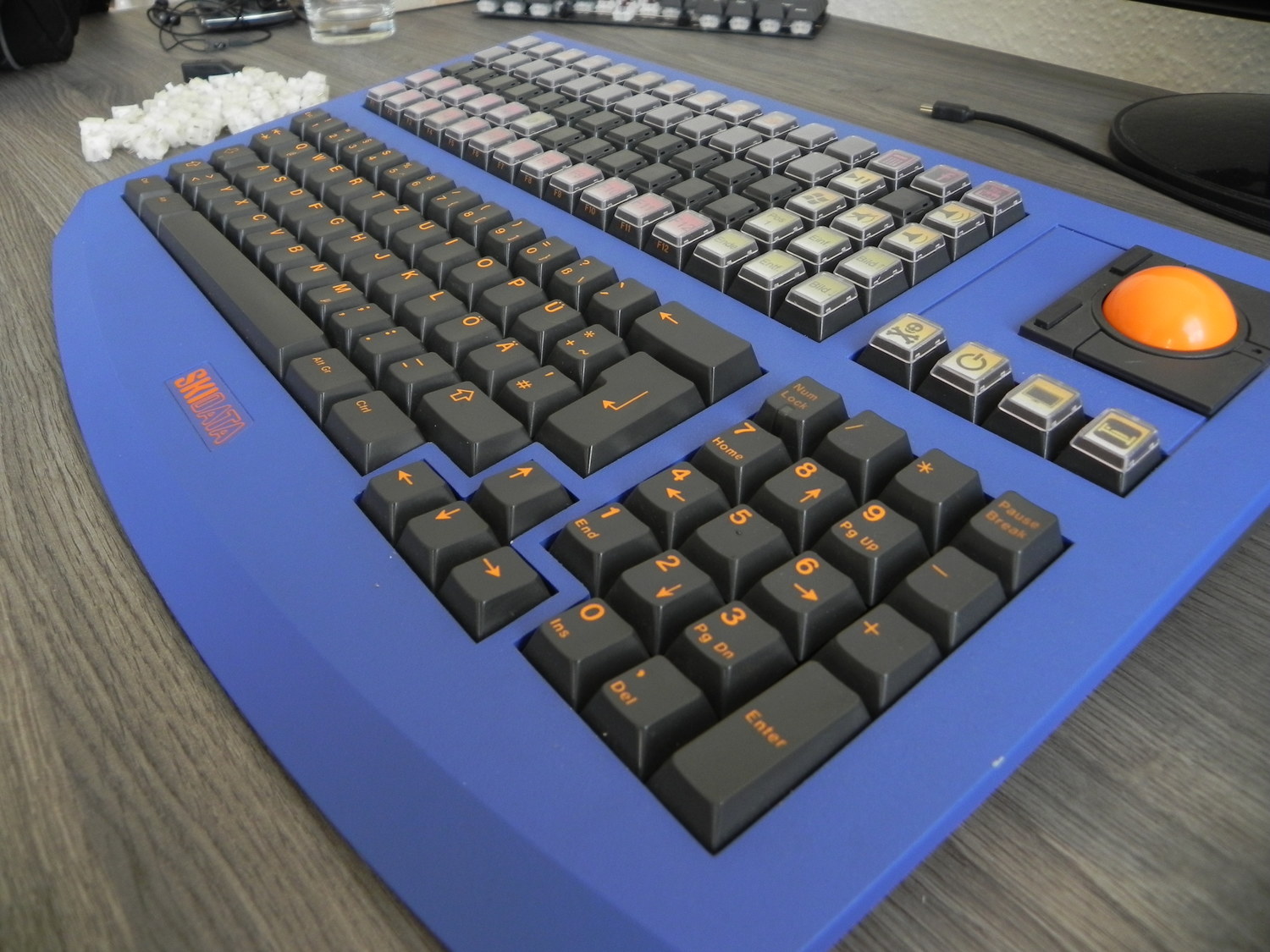 First, to get a different colour scheme. Stock keyboards tend to be all-black or all-grey. Instead you can have a keyboard that looks like some keyboard of the past—perhaps the orange-on-charcoal of Skidata terminals, the warm-grey-and-dark-grey of Dolch luggable PCs, or the grey and white with blue legends of Olivetti—or a scheme inspired by a Jukebox, Skeletor, Sencha green tea, Chocolate or whatever.

Second, keycap come in different profiles—they can have old-fashioned spherical dips in the top or the modern cylindrical style, they can be low- or high-profile, and they may be sculpted (meaning each row is a different height and angle, so together the keyboard has a curved top surface) or flat (all keys the same height).

Third there is what you might categorize as build quality—the thickness of the plastic of the caps makes a difference, as does the type of plastic (commonly ABS or the more expensive, harder PBT), and the method of printing, engraving, or embedding the legends in or on the key.

The main trick with this is that you can’t necessarily get the keys you want in the colours, profile, and key-mount you want: caps are injection-moulded and usually can only be made economically in large quantities, so for hobby keyboards it is often the case that a group buy must be organized, either through companies like Massdrop or sites like Deskthority, Geekhack, and Reddit.

The ultimate in customization is of course to build your board yourself. This is not as mad as it sounds—as an electronics project, soldering keyswitches is not an impossible project for someone who has access to a soldering iron. But you would have to approach it as a project, not a cost-cutting measure!

I used to use mechanical keyboards, back in the olden days when they were the only kind. I recently got interested in them again after a pair-programming session with a colleague during which I borrowed her keyboard. For the subsequent few weeks this has been my number one distraction activity and I have been learning about the ins and outs of various options and bought a mechanical board to see how much of a difference it makes.